Hello and welcome to our Monday edition of NHL Rumours. Hockey is getting close to coming back but there are no games yet. Last Word on Hockey will continue to bring the best news and analysis as soon as possible during this time. Today’s NHL rumours feature the Anaheim Ducks, Winnipeg Jets, Philadelphia Flyers, and Taylor Hall.

Rumour: Eric Stephens of The Athletic recently reviewed what the Ducks might do if goaltender Ryan Miller retires after this season.

Analysis: Miller is one of the best America-born goaltenders and was having a perfectly fine season for Anaheim at 39-years-old. The veteran had nine wins in 19 starts this year with a .907 save percentage and 3.10 goals-against-average. That is more than acceptable when you consider how little talent the Ducks had on their blueline in front of the net this year. There is no doubt Miller can still play.

However, nobody would blame Miller if he did want to step away. He is almost 40-years old and has a wife and son. The current global pandemic has also upended many aspects of how households function. Miller might decide he doesn’t need another 1-year deal and choose to retire gracefully.

Anaheim can turn to several options if he does. They have the 26-year-old Anthony Stolarz waiting in San Diego. Stolarz was a second-round pick in the 2012 Draft but only has 26 NHL games under his belt. He started one game with Anaheim this season and made 35 saves in a 4-2 loss to the St. Louis Blues. Most of his games were at the AHL level where Stolarz had a .922 save percentage and 2.66 goals-against for the San Diego Gulls. He represents the most experienced option.

The Ducks could also go find a cheap veteran backup for John Gibson. Several are usually on the market every summer and this year is no exception. The best option might be Laurent Brossoit if the Jets choose not to retain the 27-year-old’s services. Brossoit was very good in 2018-19 but struggled this season. Anaheim would prefer Miller’s return but they might have to take a chance on Stolarz or the open market.

Rumour: Ken Wiebe of The Athletic recently broke down what the Jets might do to improve its lacklustre defence in the offseason.

Analysis: The Jets were a surprise this year but it had very little to do with their defenders. Neal Pionk and Josh Morrissey were good but they need significant help. At least five defencemen need a new contract going into 2020-21.

One place to start would be an extension for Dylan DeMelo. The Jets traded the Ottawa Senators for DeMelo in February but wasn’t able to use him much before operations were suspended. The 26-year-old only played in 10 games with no points. He did chip in 11 hits and 14 blocks but the Jets would like more offence from its acquisition.

Winnipeg could also look to the open market even if they retain DeMelo. The most notable option might be Tyson Barrie. The former Colorado Avalanche defender hasn’t been as good with the Toronto Maple Leafs but still five goals and 39 points in 70 games this year. Moving to a team with less firepower will help Barrie recapture some of his previous production. They could explore a more defensive-minded option as well but Barrie would be an ideal power play option.

Rumour: NBC Sports’ Jordan Hall briefly explored the idea that Shayne Gostisbehere could be on the trade block again this summer.

Analysis: Gostisbehere has a lot of attractive qualities. He is only 27-years-old, has an affordable cap hit of $4.5 million through 2022-23, and has a history of solid production. The problem is that the Flyers have moved on to Ivan Provorov as their primary defender on the power play and do not need Gostisbehere as much.

It’s not clear why the Flyers have held on to him this long but the return should reasonable. Gostishbehere could fetch something similar to what the New Jersey Devils acquired for Sami Vatanen. That trade featured two prospects and a conditional fourth-round pick. Philly fans will think that isn’t enough but it unlikely Gostisbehere is worth a first-rounder in these uncertain times.

One other reason Gostisbehere would be a likely trade candidate is money. The Flyers might have some issues squeezing under the cap ceiling if it stays flat at $81.5 million. Clearing Gostisbehere’s cap hit will let the team turn its attention towards the grittier Justin Braun or several promising youngsters scheduled for restricted free agency.

Rumour: The Score’s Josh Wegman recently covered what star wing Taylor Hall might do as a result of the current pandemic.

Analysis: There is no doubt this crisis affects all aspects of the sporting world. The chief concern is rightfully on the health and safety of players and personnel but the financial impact could be massive. The league is unlikely to raise the salary cap which will force teams to make tough decisions on some players and force some into free agency. Players also might take short of cheap deals purely for job security.

Players like Hall do need to do that, however. Hall’s recent seasons with New Jersey aren’t consistent but he remains one of the half-dozen best wings in the NHL. This is a player who can still score 20 or more goals in a season with the right supporting cast. He was on target to surpass that mark before the pandemic shut things down.

Hall’s next team will have to figure out how to squeeze in a player who could count as much as $6 million towards a flat cap ceiling. Very few teams will be able to do that. His current team, the Arizona Coyotes, could clear room for him but Hall may go to a team with more money to spend that is also close to contention. He is just one pending free agent in a fascinating situation. 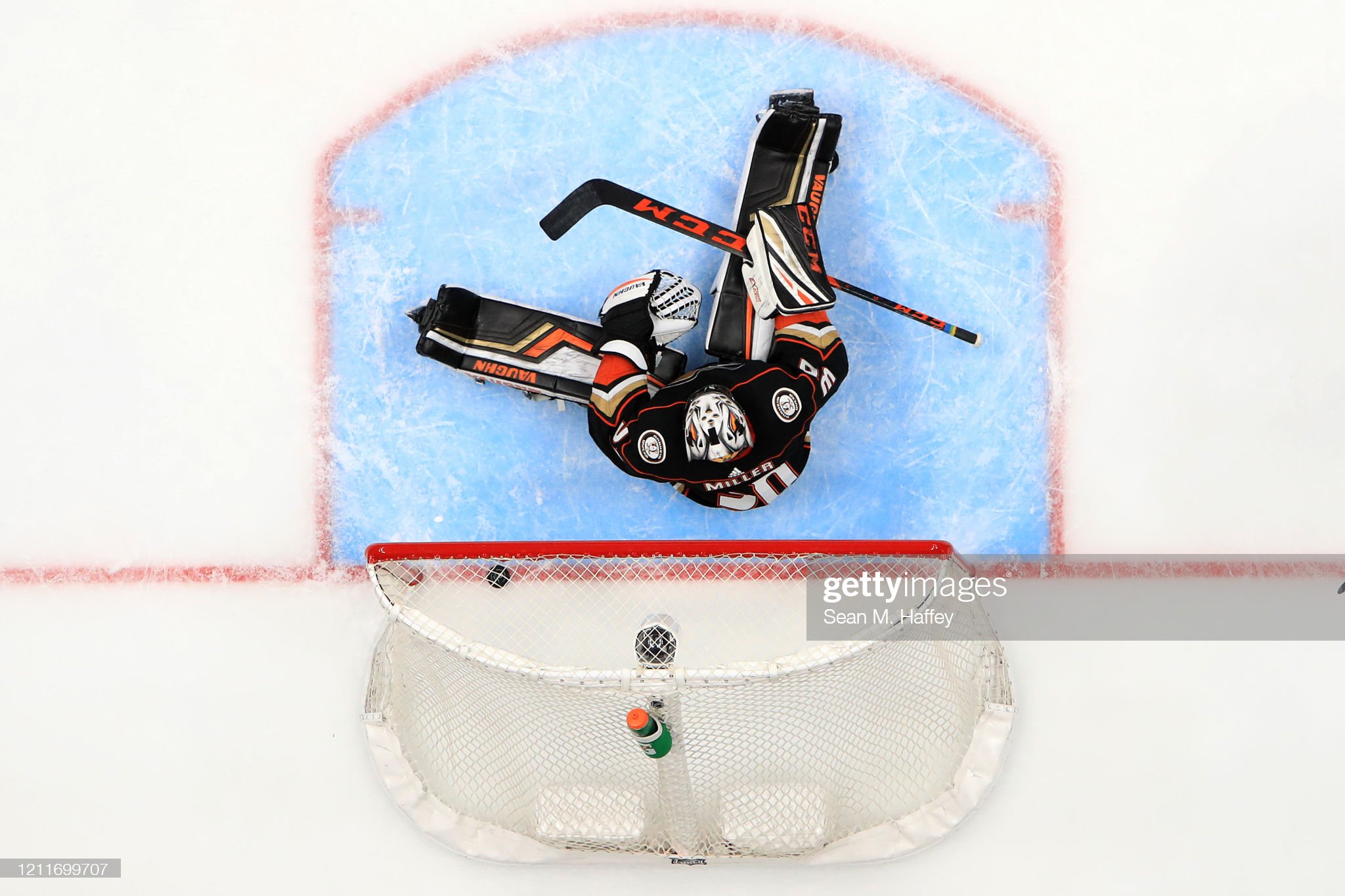 Ottawa Senators v Anaheim Ducks
ANAHEIM, CALIFORNIA – MARCH 10: Ryan Miller #30 of the Anaheim Ducks looks on after a goal by Brady Tkachuk #7 of the Ottawa Senators during the second period of a game at Honda Center on March 10, 2020 in Anaheim, California. (Photo by Sean M. Haffey/Getty Images)