Just over two years ago, there was a portion of St. Louis Blues fans who could not wait to get rid of Alex Pietrangelo. These sentiments followed an incident on March 3, 2018, in a game against the Dallas Stars. Pietrangelo, in his second season as the Blues captain, collided with Stars captain Jamie Benn. Both fell against the boards. Benn landed on Pietrangelo, pushed his face into the ice, and then got up and proceeded to score the game-winning goal. Pietrangelo did not put up much of a fight, prompting fans to call for him to be stripped of his captaincy and even traded.

Fast forward two years. The image of Benn sitting on Pietrangelo has been replaced with the image of Alex Pietrangelo becoming the first captain in Blues history to raise the Stanley Cup. Now, fans do not want Pietrangelo to leave the Blues. The free-agent-to-be, however,  will need a big contract at the end of this season. If the Blues do give him the extension, it appears likely that they will have to part ways with someone to free up money. The question is, who would it be? Who can the Blues afford to lose?

Who Leaves if Alex Pietrangelo Stays?

The first thing that needs to be factored into the equation is the salary cap. The NHL isn’t expected to raise the salary cap for the 2020-21 season, but many remain skeptical. The cap is currently $81.5 million and if it is raised, it could increase to the range $84 million to $88.2 million. Many think it’ll be closer to the former number, though.

The Blues cap hit is expected to be around $78.5 million entering the summer. With the league’s cap expected to only reach around $84 million if a rise even happens, this leaves the Blues with only $5.5 million in cap space in a best-case scenario. In addition to Pietrangelo, fellow defencemen Vince Dunn will be a restricted free agent. He is expected to make anywhere from $2 million to $4 million per year. Let’s meet in the middle and say he will cost $3 million. That leaves $2,472,501 to re-sign Alex Pietrangelo and any other free agents. Pietrangelo should easily make at least $9,000,000 (he is currently making $7.5 million this season). Simply put, the Blues do not have the cap space to re-sign Pietrangelo in this scenario.

The Blues have plenty of depth at the defensive position. Colton Parayko, Marco Scandella, Justin Faulk, and Robert Bortuzzo are locked in on multi-year contracts, and Carl Gunnarsson has one more year left on his contract. In addition to those players, the Blues have quite a few defencemen coming up in the minor leagues, such as Niko Mikkola and Mitch Reinke. With the current depth plus the depth in the minor leagues, the Blues can afford to lose Dunn, especially if it means bringing back one of the best defencemen in the game.

Dunn has never put up the goals many thought he would. However, he has still been productive without the goal totals. Diving into the advanced stats, he had the second-best xGF/60 of any Blues defenceman, behind Pietrangelo, and the highest xGA/60. He also ranked 14th in the league in GAR, WAR, and SPAR; ultimately pointing to his great ability. Even if he is not getting points in the scoreboard, he is still impacting the team in a positive way. Considering that this is only his third year in the league, there is no reason to think that he won’t start putting up the points in addition to his great advanced numbers.

In 24 games this season, Jake Allen has gone 12-6-3 with a .927 save percentage and a 2.15 goals-against average. Allen ranks fourth in the NHL in save percentage and second in save percentage. This is fantastic considering Allen is the Blues backup goalie. The problem is that Allen is getting paid as if he were a starter. Allen signed a four-year contract prior to the 2016-17 season when he was expected to be the starter of the future for the Blues. Allen’s cap hit in the 2020-21 season is $4.35 million, only $50,000 less than starter Jordan Binnington. The Blues have a few goalies, such a Ville Husso, who have been playing in the minor leagues for a few seasons and could be ready to step up as the backup goalie at a much cheaper price.

Allen only played in one game during the Blues run to the Stanley Cup last postseason. However, to get to the playoffs and have a shot at the Cup, teams need two goalies during the regular season. Allen has gotten his fair share of playing time this season. One of the reasons the Blues currently have the top seed in the Western Conference is the duo of Binnington and Allen. The Blues should not mess with this. Ville Husso, while there is potential, has not proven anything yet, and if the Blues can avoid it, why mess with what is working with Binnington and Allen?

The longest-tenured Blue was a key member of the Blues fourth line on their run to the Stanley Cup alongside Oskar Sundqvist and Ivan Barbashev. The trio shut down the top lines of every opponent the Blues faced. Alex Steen’s cap hit in 2020-21 will be $5.75 million. The Blues have a lot of depth at the forward position to where losing Steen can be affordable. The Blues could re-sign Jacob de La Rose at a much lower price and insert him into a spot on the third or fourth line.

Truthfully, Steen is the most replaceable player on this list. However, his chemistry with Sundqvist and Barbashev was so strong that the Blues could want to keep that together. The Blues do not want to stop at just one Stanley Cup. They want more, and the shutdown line of Steen, Sundqvist, and Barbashev could be the key piece of another championship.

Similar to Steen, the Blues surplus of forwards could allow for the Blues to part ways with Tyler Bozak. Bozak’s cap hit will be $5 million. Young forwards like Jordan Kyrou and Klim Kostin are still under their entry-level contracts (paying them only in the thousands instead of millions), so the Blues could save a lot of money by letting the rookies have a shot.

Bozak’s natural position is center. The Blues have the sixth-best faceoff percentage in the league this season, and Bozak has contributed to that. Winning faceoffs can be the difference between winning and losing in the playoffs. Bozak was also a solid player both offensively and defensively last postseason. He can play on any line if needed, so his versatility could be something the Blues want to hang on to.

Of course, what we have here is not a set-in-stone scenario. This scenario requires some assumptions, such as Dunn and Alex Pietrangelo’s salaries and the new salary cap for the 2020-21 season. However, this gives at least a rough idea of what may need to happen to keep Alex Pietrangelo. Unfortunately, it may come at the expense of a fan favorite and the longest-tenured Blue: Steen. 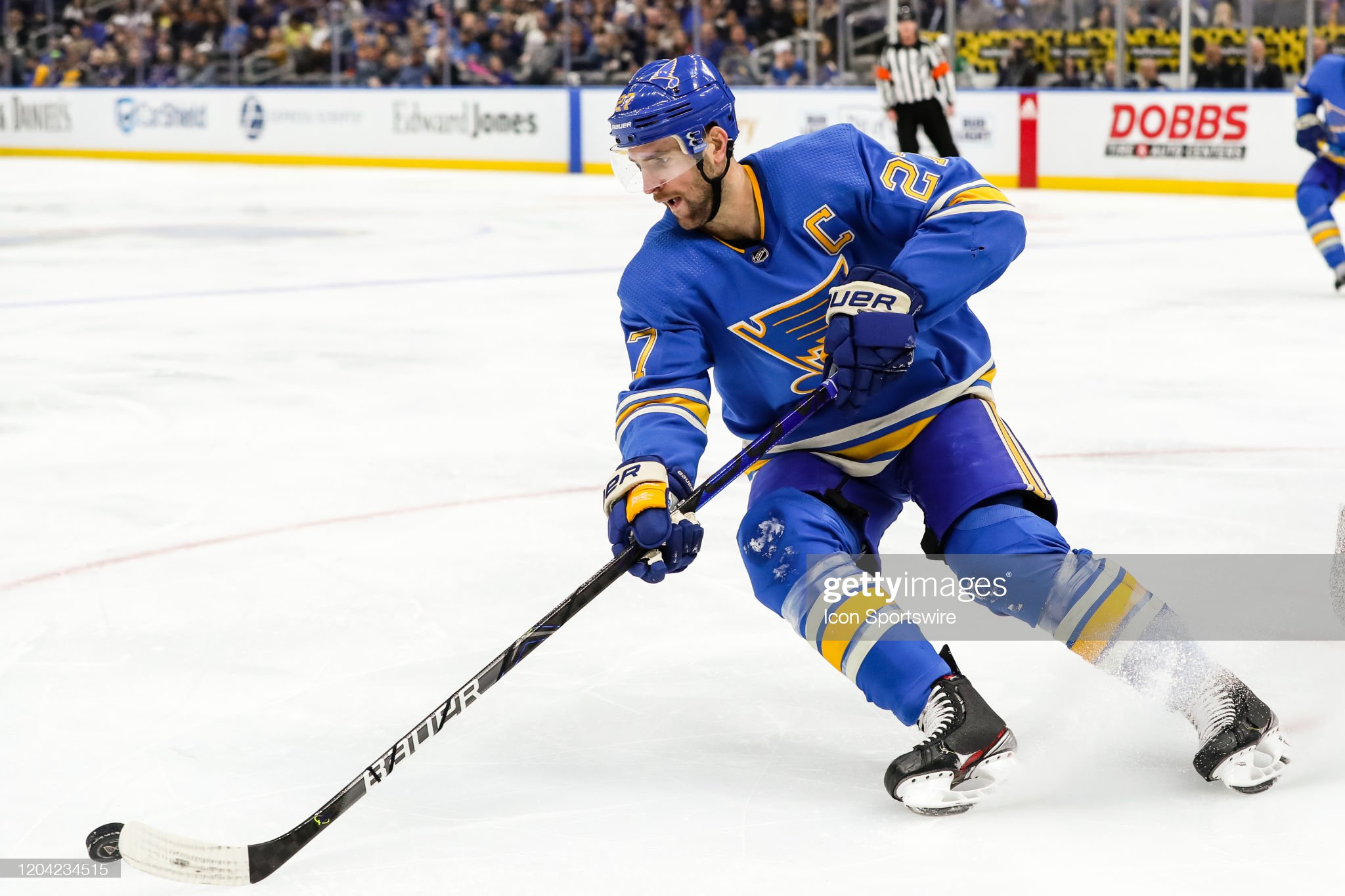 NHL: FEB 29 Stars at Blues
ST. LOUIS, MO – FEBRUARY 29: St Louis Blues’ Alex Pietrangelo hits the brakes and circles with the puck during the second period of an NHL hockey game between the St. Louis Blues and the Dallas Stars on February 29, 2020, at the Enterprise Center in St Louis, MO. (Photo by Tim Spyers/Icon Sportswire via Getty Images)

The Montreal Canadiens One Hit Wonders

Montreal Canadiens Could Move on From Carey Price

The Montreal Canadiens One Hit Wonders