The 2017 Vegas Golden Knights Expansion Draft was completed over three years ago, which seems remarkable due to the major events that increase the sense of their longevity in the league. Vegas has already been through a miracle run that resulted in Alex Ovechkin’s first Stanley Cup, perhaps the most memorable Game 7 in recent playoff history. Then there’s the ongoing pandemic that is pushing their third playoff appearance in history back, and yet they didn’t even have any hockey players over three years ago. It’s no surprise that Vegas did outstanding in their expansion draft, propelling them to that Cup Final run in 2018. It’s also no surprise that some teams would love a redo on what they gave to the Vegas Golden Knights.

To complete these rankings, a list was first made of what all 30 teams had given up to Vegas via the 2017 expansion draft (expansion picks and trades made at the expansion draft). This means that later signings and trades made by Vegas will not affect these rankings. These rankings will take total value for each player into account as well, putting their overall performance up against their salary. Lastly, the rankings were made through evaluation between what each team gave up to Vegas, and putting them all into a listed format.

Without further ado, here’s how each team did in what they gave up to the Vegas Golden Knights during the 2017 expansion draft, starting with the teams that placed 30 to 21.

Player(s) given up: Teemu Pulkkinen

The Arizona Coyotes come in the last place (or first, depending on what side you’re on), as they only gave up Finnish winger Teemu Pulkkinen. Pulkkinen produced very well in the AHL throughout his career and continued that for Vegas’ affiliate the Chicago Wolves. He put up 65 points in 75 AHL games in his only season with the Golden Knights organization. He opted to go to Europe when he received RFA status and has played in the KHL since. Pulkkinen recently scored 39 points in 50 games, splitting his season between Minsk Dynamo and Moscow Dynamo. Pulkkinen was not tendered as an RFA, and his rights were lost by Vegas when his contract expired in 2018.

Player(s) given up: Griffin Reinhart

The former fourth overall pick was the only piece given up by the Edmonton Oilers and is another one of the few Vegas picks to amount up to no value gained by the Knights. Reinhart is only more valuable than Pulkkinen due to his former potential. He was selected fourth overall in 2012, which gave him the pressure of becoming a future star in the NHL. However, his lackluster two-point career is the exact opposite. Reinhart played two seasons with the Wolves, before heading overseas to play with the KHL’s Kunlun Red Star.

Player(s) given up: David Schlemko

We are now in the range where Vegas got a small amount of value from their expansion picks. Vegas was able to get some NHL time out of the player or trade the player to receive a pick or a prospect. David Schlemko was a reliable bottom pair defenseman for the San Jose Sharks when he was picked by Vegas. However, Vegas immediately flipped him to Montreal for their fifth-round pick in the 2019 NHL Entry Draft. Vegas used this pick to select Finnish winger Marcus Kallionkeili, who had a breakout season in the USHL in his draft year. Kallionkeili then played for the Brandon Wheat Kings this past season, scoring 11 points in 24 games for the WHL team.

Player(s) given up: Brendan Leipsic

Leipsic is the first drafted player on this list to suit up in a Vegas Golden Knights jersey, netting 13 points in 44 games for the Knights. Vegas then traded Leipsic to the Canucks for prospect Philip Holm. Holm played the rest of the season with the Wolves before soon leaving for the KHL. After the KHL, he then signed back into the NHL on a two way deal with the Chicago Blackhawks. The Washington Capitals recently waived Leipsic due to a social media controversy that involved him openly insulting different teammates and their wives. Due to this controversy, he was waived by the Capitals and signed in the KHL with CSKA Moscow.

Player(s) given up: Calvin Pickard

The Golden Knights decided to use the first pick of their expansion draft on Calvin Pickard, a goaltender from the Colorado Avalanche. The Knights had planned on using Pickard behind starter Marc-Andre Fleury, creating a respectable goaltending situation for the new franchise. Vegas then signed Malcolm Subban before the season, creating a new tandem of Marc-Andre Fleury and Subban. McPhee traded Pickard to the Toronto Maple Leafs days later, with Vegas receiving prospect Tobias Lindberg and a 2018 sixth-round pick that ended up being Peter Diliberatore. Vegas then used Lindberg in the trade that brought them Ryan Reaves, where Reaves brought a physical presence and has been one of the main faces of Vegas’ rise to fame.

Player(s) given up: Luca Sbisa

Luca Sbisa, the veteran journeyman defenseman, only played one season with the Vegas Golden Knights. He did however post a surprising 14 points in just 30 games. Still, Sbisa displayed awful possession numbers, posting a 43.8 percent Corsi percentage. This made him a -9.1 percent relative to his team in that aspect. The Italian’s possession numbers increased dramatically after he departed from Vegas, as he had a 49.3 percent Corsi percentage with the Islanders, putting him positive relative to his teammates. This increase in Corsi most likely came from his zone starts, as he mainly started in the defensive zone with Vegas, while mainly starting in the offensive zone with the New York Islanders. Sbisa eventually left Vegas as a UFA, bringing only a half-season of NHL play with his pick. However, it was a very productive half-season.

Player(s) given up: Tomas Nosek

Before Nosek’s selection, he appeared to be a high scoring AHL winger who couldn’t get it done in the NHL, scoring 71 points in 121 games in his last 2 seasons in the AHL, while only netting one goal in his 17 games with the Detroit Red Wings. He surprisingly was able to become an NHL regular with Vegas, using him in an effective bottom-six role. Nosek displayed some quality possession metrics in a sheltered role with Vegas. He was able to keep his Corsi percentage above 50 percent while mainly starting in the offensive zone. Nosek also has become a reliable penalty killer for Vegas and has recently started to become a reliable faceoff taker as well, taking over 400 faceoffs this past season with a success rate of 50.1 percent.

Player(s) given up: Deryk Engelland

In one of the more heartwarming selections of the 2017 expansion draft, Engelland’s homecoming to Vegas gave the Golden Knights a solid locker room presence. Engelland used to play in the ECHL for the Las Vegas Wranglers, where he amassed enormous amounts of penalty minutes. He then made his quick rise to the Pittsburgh Penguins. The Edmonton native soon became one of the faces of Vegas due to his leadership abilities rather than his talent. In the magical 2017-2018 season, Vegas nominated Engelland for the King Clancy Trophy. He also was the winner of the Mark Messier Leadership Award. Engelland is currently 38 and is an unrestricted free agent.

Player(s) given up: Jon Merrill

Jon Merrill is another reliable, low scoring defenseman Vegas was able to grab in the expansion draft. Merrill scored 25 points in 140 games during his tenure with the Golden Knights. Merrill played for a lackluster New Jersey Devils team, where he posted some pretty awful possession metrics. His Corsi and Fenwick percentages were consistently under 50 percent. This was mainly due to the lack of talent on the Devils, however, as these possession metrics were pretty consistent with the rest of the team. When Merrill reached Vegas he was thrust into the offensive zone, starting 58.7 percent of his shifts there. Merrill’s two-year deal with the Golden Knights is up after this season. It is unclear whether Vegas will re-sign the left-shot defenceman.

Player(s) given up: Connor Brickley, 2017 Fifth Round Pick(Bos)

When Vegas picked Brickley, he was an AHL defenseman coming off a 26 point season with the Charlotte Checkers. Brickley was a pending UFA at the time of his selection and didn’t end up signing with Vegas. He then quickly left to sign a deal with the Florida Panthers. While Brickley ended up giving Vegas nothing in terms of assets, the fifth-round pick gave Vegas tremendous value. Vegas used this pick to select high scoring NCAA winger Jack Dugan, who recently led the entire NCAA in points during just his sophomore season. The Hockey East First All-Star Team named Dugan to their team. The ACHA First All-American Team also honored Dugan after his tremendous season with Providence. Scott Wheeler of The Athletic recently ranked Dugan as the 47th best NHL affiliated prospect, putting Dugan above guys like Alexander Romanov, Jake Bean, and Liam Foudy. 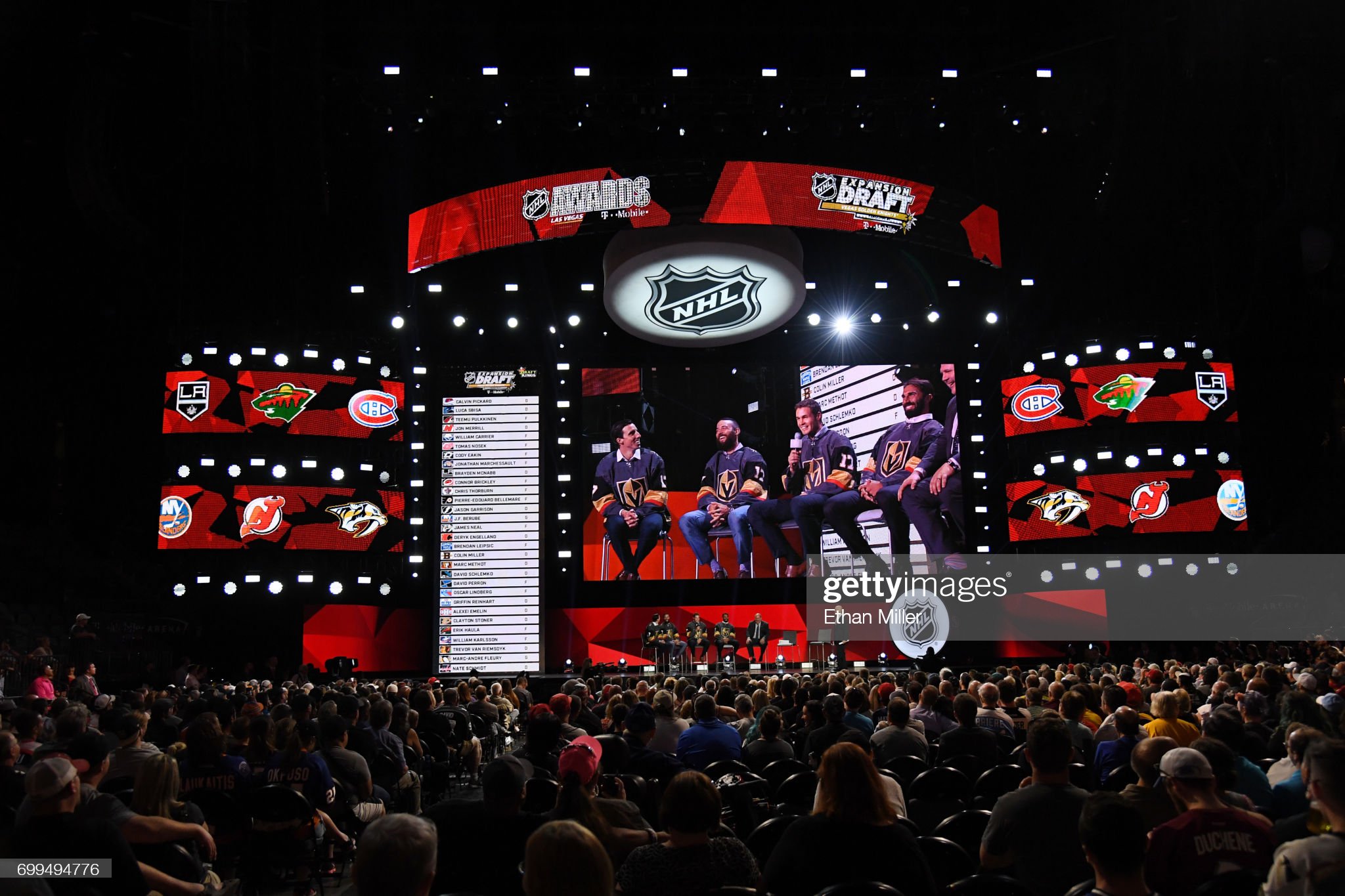