Welcome to Last Word on Hockey’s One Hit Wonder series. Each day, we will take a look at a new team’s three biggest one-hit wonders. These are players that had one great season or playoff run but never did anything like that again. Join us every day for a new team! Today we take a look at the Philadelphia Flyers One-Hit Wonders.

Up first on the Flyers one-hit-wonder list is Ville Leino. The Finnish-born, centre turned left-wing, wasn’t drafted to the NHL. Instead, playing first for his hometown at 17, he was recruited to the Finnish Elite League or SM-Liiga. Playing for three separate teams in the league, Leino proved to the Detroit Red Wings he had what it took to play in the NHL.

During his final season in SM-Liiga with Jokerit Helsinki, after putting up 28 goals and 49 assists for a total of 77 points, the Red Wings signed him to a one-year contract for the 2008-09 season. Due to salary cap issues, he was relegated to their AHL affiliate, the Grand Rapid Griffins.

Leino was eventually recalled to the big leagues and scored in the first period of his NHL debut against the Washington Capitals. Signed to a one-year extension with the Red Wings, Leino was traded in February of 2010 to the Flyers for defencemen Ole-Kristian Tollefsen.

Leino’s one-hit-wonder-season is actually more of a one-hit-wonder playoff run. Starting the 2009-10 season with Red Wings, he tallied four goals and three assists in 42 games played. While he only ended up playing 13 regular-season games with the Flyers, he was an integral piece of their Stanley Cup playoff run.

Beginning the 2010 Stanley Cup playoffs as a healthy scratch, Leino looked like he didn’t have a shot at playing. Only injuries to Simon Gagne and Jeff Carter allowed Leino to get in the game and show the Flyers what he was capable of.

Alongside linemates Scott Hartnell and Daniel Briere, Leino put up seven goals and 14  assists in just 19 games. He ended up tying the record for most points by a rookie in the Stanley Cup playoffs, held by Dino Ciccarelli.

Leino would prove to be essential during key moments of the 2010 playoffs. Scoring the game-winner in Game Four of the Stanley Cup Finals, Leino tied the series and ultimately kept the Flyers from going done 3-1 in the series. The Philadelphia Flyers would eventually lose to the Chicago Blackhawks in six games, but Leino would go down as one of the most influential Flyers players in history.

Leino played with the Flyers for one more season. In 81 games, he had 19 goals and 34 assists for a point total of 53. He had a solid showing of five points during the Flyers playoff run and helped his team to the second round, but they ultimately lost to the Boston Bruins.

As an unrestricted free agent in the summer of 2011, Leino signed a six-year, $27 million contract with the Buffalo Sabres. Never again reaching the point totals he brought to the Flyers, his time in Buffalo was underwhelming.

In three years with the Sabres, Leino put up some pretty low numbers compared to his previous success. In 2014, the Sabres dropped him to waivers for the purposes of giving him a compliance buyout. The Sabres ate $7.33 million in order to buy out his three remaining seasons.

Leino returned to Europe and played three more years of professional ice hockey. Jumping from league to league and team to team, Leino eventually announced his retirement in 2017.

Boucher was a phenom throughout his career in the minor leagues. Winning the Calder Cup during the 1998 season, he posted insane numbers, including a 1.94 goals-against average and a .944 save percentage. He took those numbers with him into his NHL rookie season. The 1999-00 season was Boucher’s first with the Philadelphia Flyers.

During Boucher’s rookie campaign he led the league in goals-against average and helped the Flyers to an Atlantic Division title and a conference final appearance. After playing just one game with their AHL affiliate, the Flyers pulled up Boucher to work his magic. And, work his magic, he did.

Taking the starting position from John Vanbiesbrouck, Boucher played a total of 35 games with the Flyers that season. Posting the league’s leading goals-against average, 1.91, and a save percentage of .918, Boucher earned a spot of the NHL’s All-Rookie Team. He received votes for both the Calder and Vezina trophies as a result of his play.

His netminding helped the Flyers make a real run at the Stanley Cup. Facing 485 shots throughout the playoffs, Boucher’s save percentage remained a .918. His five-overtime win against the Pittsburgh Penguins and his incredible save against Patrik Elias in Game 3 of the conference finals made his goaltending something to remember. Boucher’s goals-against average of 2.03, 11 wins and seven losses, and one shoutout had the Flyers falling just short of a Stanley Cup Final appearance. They lost to the eventual Stanley Cup Champions’ the New Jersey Devils.

Boucher went on to play in Philadelphia for two more or less lackluster seasons. He was traded in 2002 to the Pheonix Coyotes. A solid goaltender throughout the rest of his career with the Phoenix Coyotes, the Calgary Flames, the Columbus Blue Jackets, the San Jose Sharks, and the Carolina Hurricanes, he never quite returned to being a Vezina-nominated goaltender.

Another memorable moment of his 13-year career, Boucher recorded the longest shutout streak of the modern era at 322:01 as a Coyote during the 2003-04 season. Despite Boucher’s effort, the Coyotes did not qualify for the 2004 Stanley Cup playoffs. Boucher did not return to the playoffs with the Coyotes, Flames, the Blue Jackets, or the Hurricanes.

Another Philadelphia draft pick, Mikael Renberg, is the third Flyers one-hit-wonder. Drafted 40th overall, the Swedish right-wing spent his first few seasons with Lulea HF in the SHL. Tne Flyers offered him a contract for the 1992-93 season, but Renberg turned them down. Claiming he wanted to be ready for the NHL, Renberg’s rookie campaign didn’t begin until 1993-94. In his last season in the SHL, Renberg put up 32 points, 19 goals, and 13 assists.

While Renberg was an amazing two-way player and a solid scorer throughout his career, he outdid himself during his rookie season. 38 goals and 44 assists resulted in an 82 point season and the setting of a still-standing franchise record for most points by a rookie. He also set a rookie record with a 10-game point streak that was only broken in 2016 by Shayne Gostisbehere.

The 1993-94 season saw Renberg jumping from line to line, playing with the likes of Eric Lindros, as well as Rod Brind’Amour. He put up points wherever he went. A finalist for the Calder Trophy, named to the NHL All-Rookie Team, and the first winner of the Flyers Pelle Lindbergh memorial player for most improved player, Renberg’s rookie season was one of renown.

Renberg went on to have an extremely successful career, but he never broke his rookie record of 82 points. Renberg played three more consecutive seasons with the Flyers, and became a necessary component of the “Legion of Doom.”

A line consisting of Eric Lindros, John LeClair, and Renberg astonished the league. Together, they went on to collect 80 goals and 96 assists in the lockout-shortened 1994-95 season.

After his time with the Flyers, Renberg played with the Tampa Bay Lightning, the Flyers for two more seasons, the Pheonix Coyotes, and the Toronto Maple Leafs. 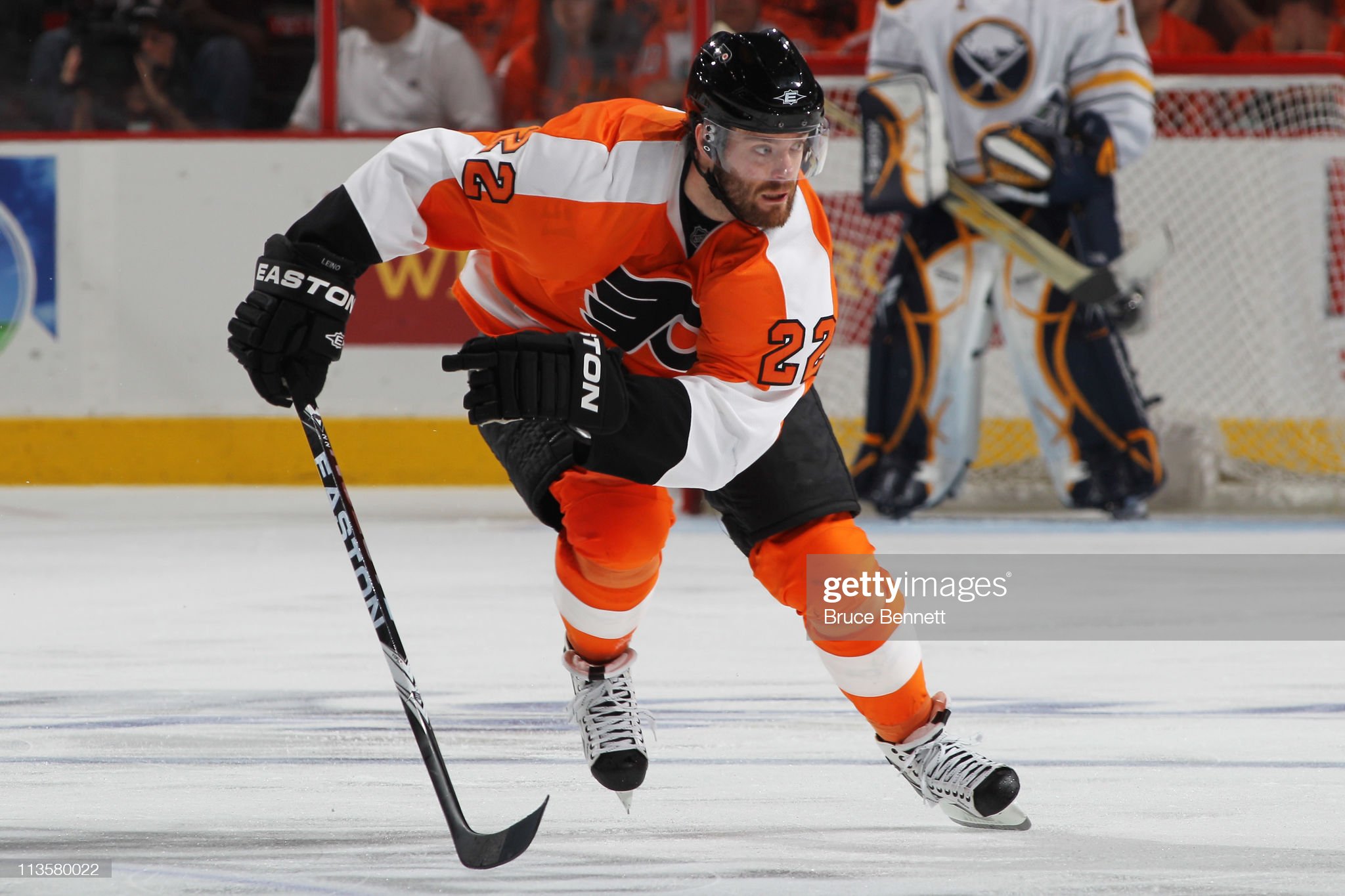